Attention Workshops: The ADA Integration Mandate Applies to You 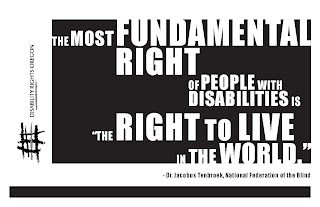 Employment services are included in the integration mandate of the ADA! This recent ruling in Oregon by United States Magistrate Judge Janice Stewart is a huge landmark decision. It should cheer advocates who are working to slow and eventually end the growing numbers of people with disabilities needlessly spending their days in segregated sheltered workshops.

Similar  to many states, most Oregonians with developmental disabilities in vocational services work in sheltered workshops, even though most would prefer to work in a real job. Each year, more are referred to these facilities. Sadly, this includes graduating students with disabilities – who should never need to see the inside of a workshop. This year a lawsuit spearheaded by Disability Rights Oregon was brought on behalf of 2300 individuals with disabilities in that state being needlessly kept away from real job opportunities. The suit charges that the state is violating the ADA by not providing employment services to people with disabilities in the most integrated settings appropriate. Now, the judge in the case has ruled that the plaintiffs can make such a claim under the ADA.

A legal basis for the suit was a previous Supreme Court decision known as Olmstead. Olmstead found that Title II of the ADA requires states to offer services in the most integrated setting possible, including shifting programs from segregated to integrated settings. Up to now, litigation under Olmstead has focused on supporting people in residential institutions to move to community settings. This has been followed by suits about other congregate settings such as nursing homes that claim to be community-based, but really serve as institutions, unnecessarily segregated people as well. Most recently, advocates have used Olmstead to challenge waiting lists and even state budget cuts. But this case is the first specific ruling regarding employment services and the integration mandate of the ADA.

In response to the suit, Oregon filed a Motion to Dismiss the case, saying that employment claims cannot be made under Title II of the ADA and that Olmstead does not apply to employment services. In her ruling, Judge Stewart stated “…this case does not involve ’employment,’ but instead involves the state’s provision (or failure to provide) ‘integrated employment services, including supported employment programs.'” The Judge thus affirmed that employment services is included in the integration referred to in the ADA, and gave the Plaintiffs time to file an amended complaint due to wording problems in the complaint, so further rulings are still to come on the case.

Oregon is just the tip of an iceberg. The state currently spends $30 million a year for individuals with disabilities to be in  sheltered workshops – the lion’s hare of state vocational service dollars. With few exceptions, this is also true nationally. In NY, some estimates are close to a billion dollars spent for segregated day services. Yet, a 2010 study by Oregon’s own agency notes that cumulative costs generated by sheltered employees may be as much as three times higher than the cumulative costs generated by supported employees – $19,388 versus $6,618.”

Even though every state provides supported employment, on average these services represent only one of every five people served. Vastly more money is spent on segregation than on integration. And so far, most vocational service providers have responded by circling the wagons to protect their facilities. Most states do not even have an Olmstead plan related to phasing in more integrated employment services. Very few have any practical plan to reduce the population in sheltered workshops in a thoughtful way over time. Instead, there are vague goals of improving employment outcomes and little supporting funding. It seems that state money just keeps flowing to how and where it was spent previously, so real change never comes.

So maybe the time has finally arrived for us all to recognize the injustice of this. And apparently, it has taken a lawsuit to jump-start it. I say it’s about time.