Let Me Get This Straight. You Don’t Want the Institution to Close Because You’ll Lose YOUR JOB? 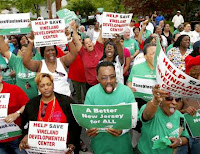 Controversy continues regarding efforts around the country to close large state-run institutions for people with developmental disabilities. Many of these recent closure announcements have more to do with excessive costs (which are absurdly high) in tough budget times, combined with an ongoing inability to end serious abuse and neglect, as reported in the media in various locations.

Both of those issues are of course serious instigators for institutional closure, but they are really symptoms of the true problem. The most compelling issue by far is that the support that can be provided at such facilities is inadequate, segregated from our society, and obsolete, when compared to the life quality and individualized support that can be offered in small, local community settings. The associated costs and abuse and negligence at institutions are outgrowths of a model that is badly flawed. No amount of video monitoring, quality assurance controls, new or rebuilt structures, or other measures can fix the fundamental problem.

In response, some families fall back on the “choice” argument (“we should have the option of knowing what’s best for our child, including institutionalization…”), which I can empathize with, but have discussed elsewhere in this blog as not being a sound argument. Others talk about the impact moving out would have on individuals. This is, of course, important, and the experiences in other states must be used to learn how to minimize any negative impact.

Also, there must be a community support system to move to that is functional and effective. None of this is easy, but all these issues are solvable, and don’t change the need for closure. We know this because a dozen other states have accomplished full state-wide closure reasonably successfully. There remain problems in some community settings to be sure, but they are a different set of problems on smaller scales with more individualized solutions.

But I want to put that complex discussion aside for a moment, and focus on the reactions of one key group to announcements of planned institutional closure – the employees who work there. This is the institutional staff; state employees, who, I’m sure, are caring people. Despite their compassion, they naturally view a facility closure through one lens, that of personal job loss.

As a result, their employee unions have reacted to announcements of intentions to close a facility with protest rallies. They have released scary statements regarding the huge economic impact their job loss will have on local communities. They are doing their mission to protect jobs, thus working hard to stop plans for moving people out and closing the center. Yet, there is a bigger picture – let’s consider this for a moment.

Certainly a significant job loss in any community is cause for concern. There would need to be steps taken to support transfers into other public sector positions, and provide for re-training and job placement. Job downsizing should come in stages whenever possible. But let’s get this straight. Public sector job loss is not the core priority when deciding whether an institution should close, nor should it be. What should be central at all times is what is the best we can do for those people living in institutions.

Unfortunately, state governments don’t always seem to weigh these factors in this way. In NJ, a task force is now reportedly reviewing closure plans based on several concerns. One is “the economic impact on the community in which the developmental center is located if that center were to close.” A second is “projected repair and maintenance costs of the center.”

These are considerations for planning how to do the closure, not for whether there should be one. That decision should be based firmly on one thing, and one thing only: What is best for the people that live there. Job security just does not stand equal to that. And in any informed discussion of service design, the evidence for quality service all points to community life with customized support.

If you ignore this central fact, and then untangle the arguments, what you have left is a group of vulnerable people kept in an unnecessary, obsolete, and potential harmful environment, so those who work there can continue in their jobs. How is this different from keeping people hostage to maintain a local economy?

Not only that, spending on institutions comes at a cost; this is taxpayer money that could be spent on improving and expanding needed community-based disability services, now burdened with wait lists, understaffed, and with inadequate training. If you were to set your spending priorities from scratch, there is nothing, and I mean nothing, that supports spending money on keeping people in facilities rather than supporting them in the community.

Yet, in Illinois, the state union, AFSCME, is fighting hard to prevent the Jacksonville Developmental Center from closing, sending letters to lawmakers and holding public protests.

In NJ, the announcement of the planned closure of the Vineland Center has caused a storm of controversy and protests (see above photo) from public union officials and workers.

In one NJ news report, a union official “pointed out that the elimination of over 1,400 jobs in a county with rampant unemployment would bring local businesses and the entire community down.” That statement was followed by the comment, “We’re not here just to collect a paycheck, we’re here because we care.”

I’m sure that union official truly believes that. But for it to be meaningful, one should do some research into what we have learned these last twenty years about serving people in non-segregated environments. That pairing of “we care” with “job loss” implies those issues are partners.

But if you really cared about what’s best for the people you supposedly work for, than you’d be protesting their continued needless isolation from society, not your paycheck.